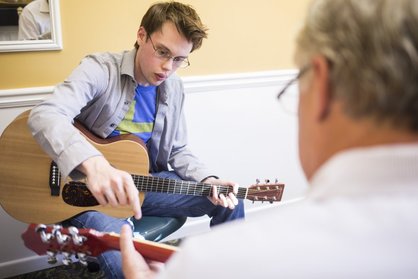 Trammell Byce speaks to Dr. Howell Lewis in an encouraging voice, telling him he's "doing very good." Lewis plays different chords on the guitar strapped around his chest. In this case, Trammell is the teacher and Lewis is the student — despite the fact that Trammell is 22 years old and Lewis is older. "I am an absolute beginner," Lewis said, laughing. "I think I'm too old for this. But Trammell's mom said, 'You are never too old.'" Lewis, an orthodontist in Anderson, is motivated to learn the guitar now so that he can honor his late son, Howell Joseph Lewis, known simply as Joe by those who knew and loved him. Joe died from a drug overdose at the age of 26 on Dec. 18, 2014. The young man, who had an incredible sense of humor and was known by so many because of his charm, had succumbed to years of battling a drug addiction. He died two weeks before he and his younger brother, Bill, were to record their first album with their band, Howell and the Broken Hearts. Lewis said he believes nervousness and anxiety about recording that first album may have sent his son into another downward spiral. This one fatal. "He was sweet and kind and honest about his problem," Lewis said. "He wanted to quit and tried very hard to do so." Joe's battle with drug addiction may have been the result of a deeper problem — depression, Lewis said. That depression stemmed from a lack of self-confidence. That may have been brought on by the fact that Joe suffered from dyslexia, which affects the way the brain processes the spoken language, Lewis said. According to the International Dyslexia Association, "Dyslexia can also affect a person's self-image. Students with dyslexia often end up feeling less intelligent and less capable than they actually are." The struggles he had with depression and addiction made it into Joe's song lyrics. "Every song was about that, about his struggles," Lewis said. That's because music is what Joe loved, Lewis said. It was his outlet, his way of expressing himself. Music was something he had grown up with his whole life — a legacy passed on to him through his father. Posters of music artists, like Lynyrd Skynyrd, Blackberry Smoke and Arlo Guthrie, cover the walls in Lewis' dentist office. Lewis, who grew up in Greenville, always has played the drums. He grew up in the 60s, an era when, he said, "if you didn't love music, something was wrong with you." His first job was at a record store, and Lewis said he lied about his age on the job application just so he could go to work there. He said he was 16, when he was only about 14 or 15 years old. Lewis laughs when he talks about playing in bands as his two young boys, still toddlers, would listen along as he and his band mates played their songs. "I bought them their first drum sets when they were 2 and 3 years old, " Lewis said, laughing. "Most people say you are crazy for buying drums for your children." But that's just the way it was for the Lewis men. Music was their passion — their life. That's why, when Joe died, his father, his brother and the Broken Hearts, still went on and recorded that album, a collection of 10 country rock songs, called "The Beauty of Pain." Lewis said they went forward with making the album to honor Joe. Now Lewis's goal is to learn how to play the guitar so he can play the 50 songs that Joe wrote. Eventually, Lewis said, he and The Broken Hearts, are going to record four or five more albums, with Joe's songs on them. "It's hard to put into words why I want to do this," Lewis said. "I just want to play my son's songs." For close to two months now, Trammell has been passing on to Lewis what he knows about the guitar — an instrument that Trammell taught himself how to play. It was an instrument he picked up, he said, so that he would know how to play more than the harmonica. Like Joe, Trammell inherited a love of music from one of his parents: his mother, Linda. "She always had music playing in the background when I was growing up," Trammell said. "Music is a part of me. Something feels off when I'm not playing." And the lessons don't cost a thing for Lewis, because the two are working out a trade. For help with braces that Trammell needs, Lewis is learning how to play the guitar. It's how the two met, in fact. Trammell needed braces and came in to Lewis' office for an appointment after someone recommended Lewis. As the two talked during his first appointment, they realized that they had a shared love of music. And Lewis learned that his patient was also a guitar player, and already had a couple of students he was giving guitar lessons to. Now, the two meet once a week and they share stories about their favorite musicians and Lewis takes a few more steps to reaching his goal. "It feels like it's going to take me 10 years to learn," Lewis said, laughing again. "But it has worked out perfect, because I got the perfect teacher." 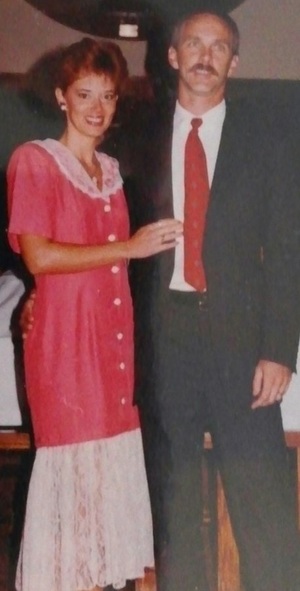